A Trip to the Disappearing Aral Sea

Home/A Trip to the Disappearing Aral Sea
Previous Next

A Trip to the Disappearing Aral Sea

A trip to the Aral Sea is one of the more unique experiences you can have while traveling in Uzbekistan. The Sea has lost about 90% of its water volume since the 1960’s due to diverting inflowing water for cotton irrigation, so it’s an experience that travelers may only be able to have for a short period of time longer. It’s a lot of work to the Aral Sea, in 2016 taking about eight hours in each direction (including stops for photos and lunch). The trip is going to get longer and longer each year as the sea continues to shrink.

I debated during the majority of my time traveling through Uzbekistan whether or not I was actually going to do the tour, mainly because the cost was somewhat higher than I was aiming to average for my daily expenses. About a week before the tour, a forth person expressed interest in joining, which brought the cost down to around $165 per person, depending on if you were traveling solo or with a partner (meaning that you could share a tent). I paid $169 for the two-day tour which included all meals, transport, and one night of lodging near the sea.

The Tour to the Aral Sea

During the drive out to the sea, you’ll make a few miscellaneous photo stops and a lunch stop, but you’re really spending the full day driving and looking out across the steppe. A steppe is characterized by grassland plains with no trees except for near rivers and lakes.

When you finally reach the sea, you’ll have to walk the last couple hundred meters as the ground is still wet and a car (or even SUV) would easily get stuck. Reaching the waters edge and wading out into the water means walking through another fifty or so meters of thick, slimy clay… but kind of in a good way. If you’re willing to wade through a few meters of clay, you can even go swimming in the lake. 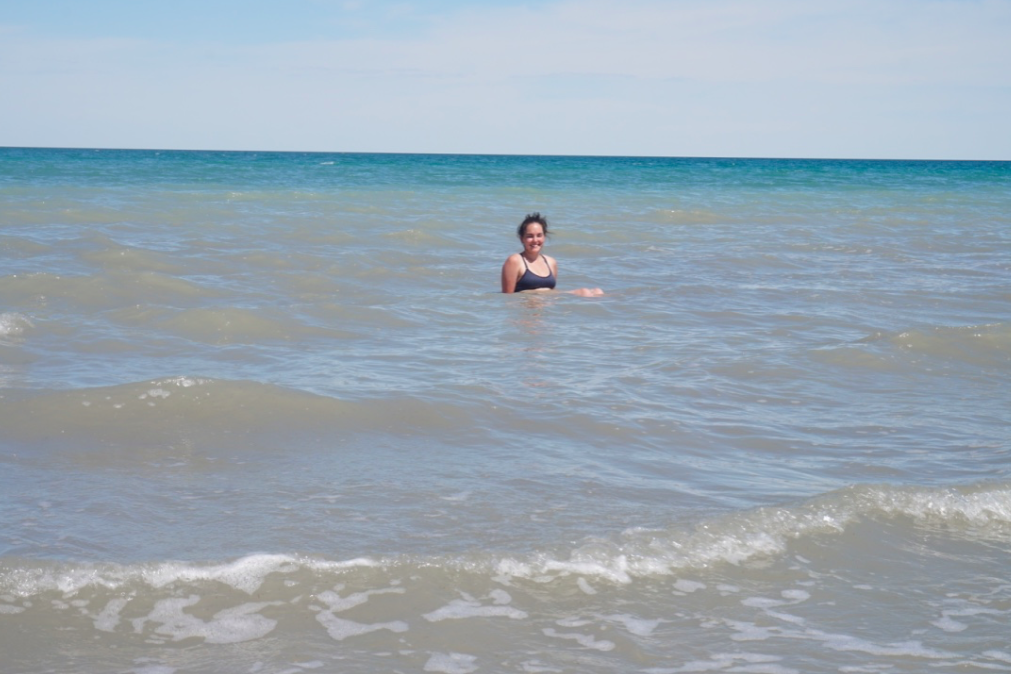 Because the Aral Sea is a salt-water sea and the total volume has decreased by 90%, that means that the salinity has increased from about 10ppt in the 1960s to 100ppt now. For comparison’s sake, the Dead Sea’s salinity is about 340ppt, so the Aral Sea is quite a bit less salty than the Dead Sea. Even so, keep the salinity in mind when deciding to throw your clothes back on over your wet swimsuit like I did – especially if you didn’t bring anything else to wear. It will surely mean doing an impromptu load of laundry due to your clothes being so salty… I’m not talking from experience or anything here! 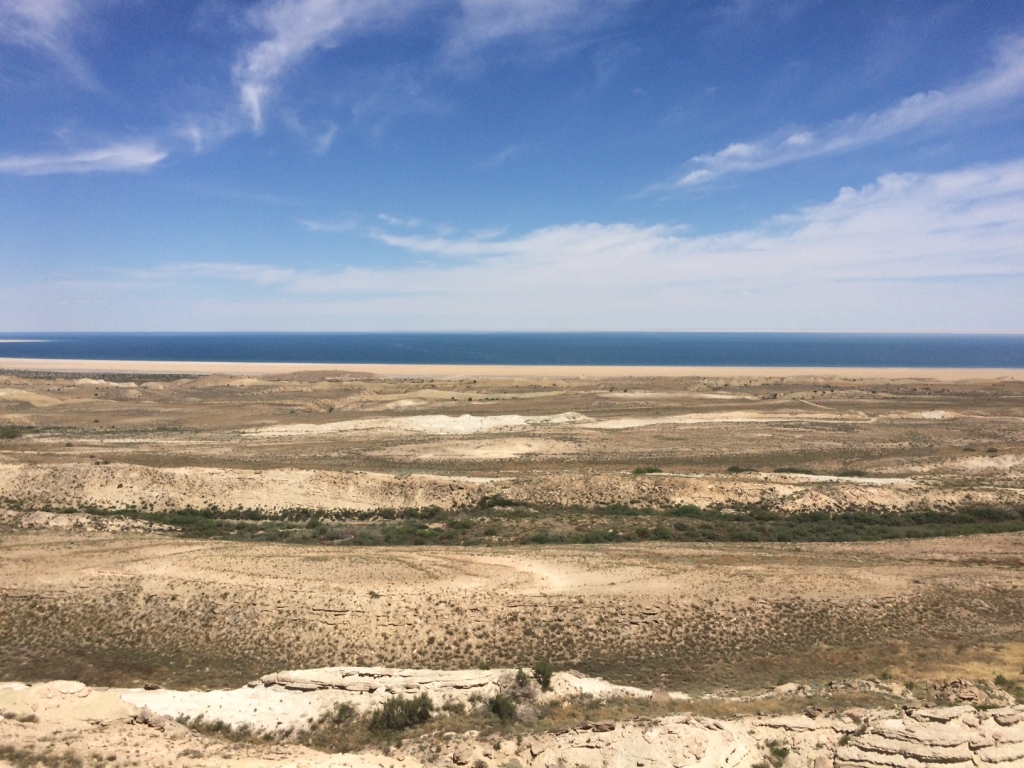 Since the drive is so long in each direction, you’ll actually spend a night sleeping a little way from the water’s edge, but still well in view of the sea. After a long, hot day in the car, my travel companions and I were all very ready for a meal, which was quite good, and after spending a few hours at the table chatting and reading we were all ready for an early night, especially with an early morning coming the following day. 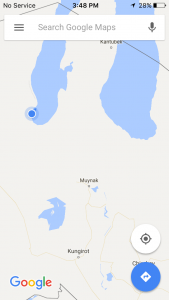 In late-June, the sun rises around 5:30 in the morning, so we were all up bright and early to watch the sun rise over the sea. It was a gorgeous site to behold. I wish the pictures did it justice, but they never do. 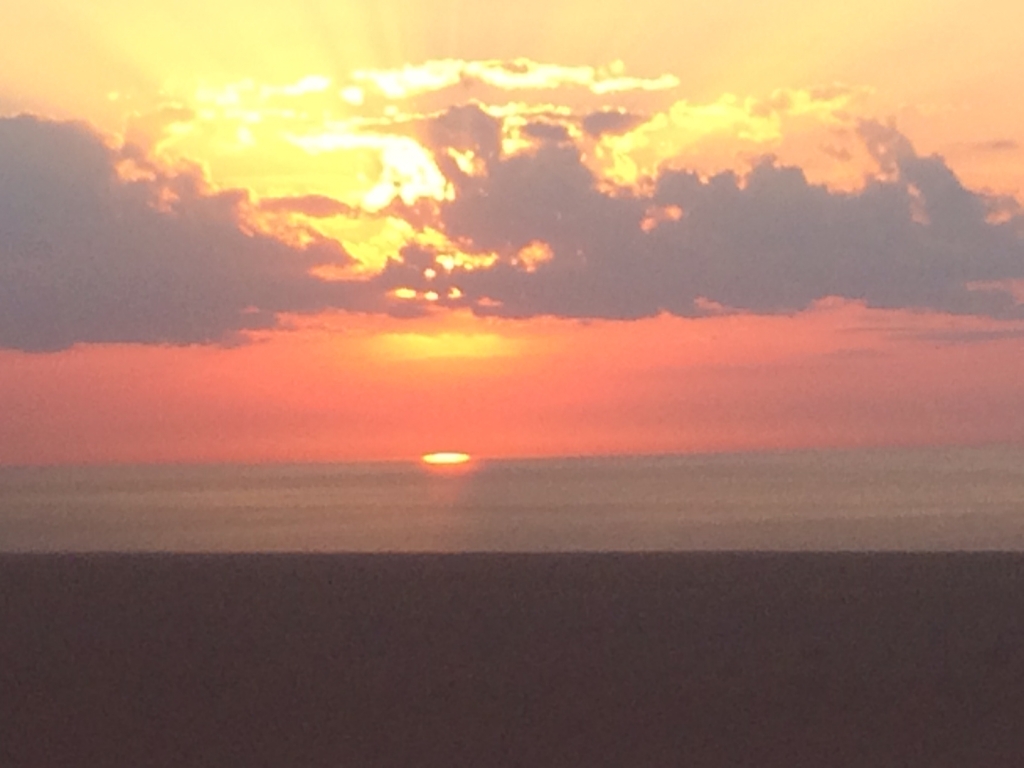 After the sunrise and a quick breakfast, we were off again. First heading to Moynak, a fishing village that used to be on the shore of the Aral Sea and then eventually back to Nukus where the tour would end.

The drive to Moynak actually goes through the dried up seabed and makes it painfully obvious how much of the sea has dried up. The previous day I had been thinking that it wasn’t as bad as everyone made it seem, because from the western coast where we camped the shore hasn’t retreated anywhere near as far. This is mainly because the water was really really deep on that shore, but it is no longer. Not something that is as easy to visualize as spending hours driving through what used to be sea. 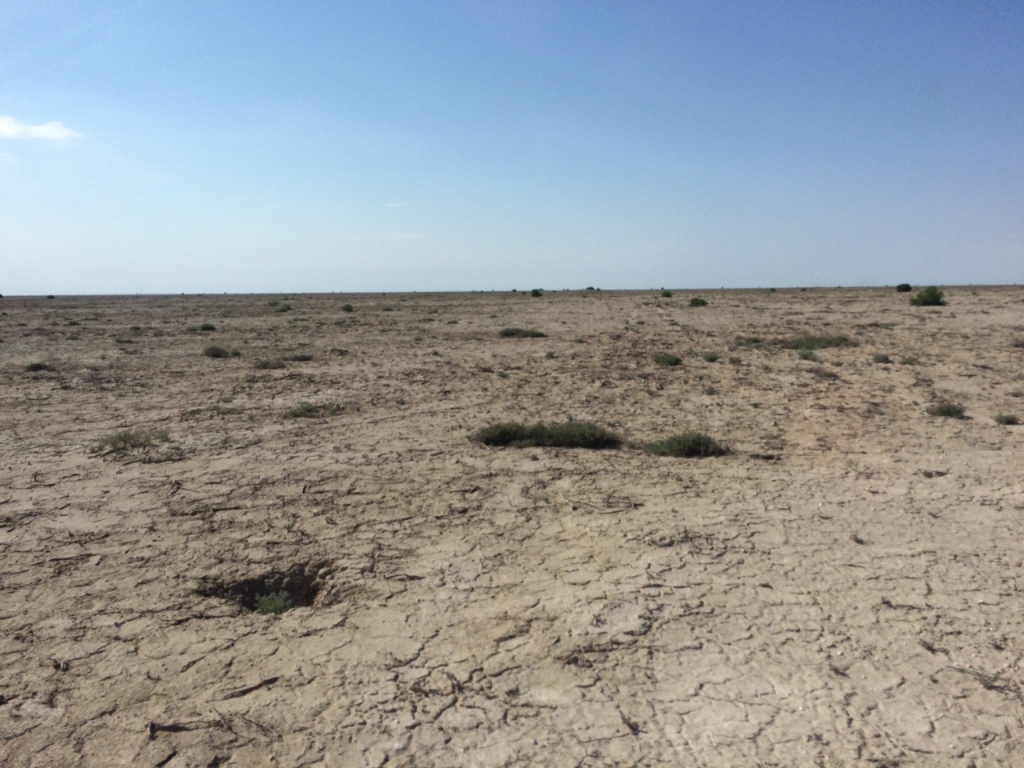 Moynak was no less depressing then spending a few hours that morning driving through the seabed. There is a memorial to the Aral Sea as well as photos showing the history of the sea and how much it shrank during each decade. A bunch of old fishing rigs are sitting nearby on the dry ground in what used to be Moynak’s harbor. 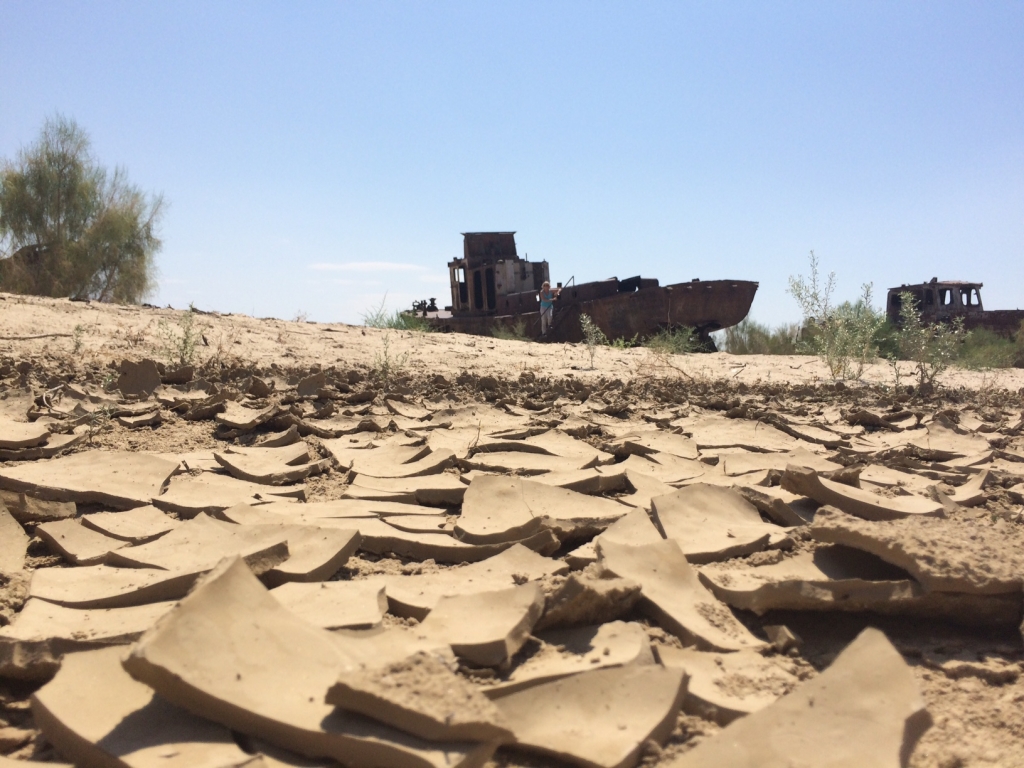 Following our short visit in Moynak, we continued back along the semi-paved road to Nukus where the tour concluded.

My Impressions of the Aral Sea

When driving out to the Aral Sea, we did not drive through the seabed, and upon our arrival at the sea I was surprised at how little the sea seems to have retreated from it’s original shoreline. It turns out that the sea just used to be quite deep in that spot, so the shoreline has not retreated much but the sea level is significantly lower than it once was.

It wasn’t obvious to me how much the shore had retreated until the second day of the tour when we were driving back toward Moynak from our camping spot the night before, and it was seriously shocking. We drove for multiple hours and well over 100km before reaching Moynak.

Overall, I was glad that I decided to go on the tour because it was a very unique experience compared to others that I had both in Uzbekistan and on my travels in general. Not to mention, it’s something that I likely won’t have the option to do if I ever visit Uzbekistan again, considering that the Aral Sea continues to disappear each year. Even if it is still there on a future visit, it becomes harder and harder to reach – and the time I spent in the car as-is was pretty brutal, especially in the hot hot summer.

Would you visit the Aral Sea?