Home/How to Apply, Schedule and Move Up a Global Entry Appointment
Previous Next 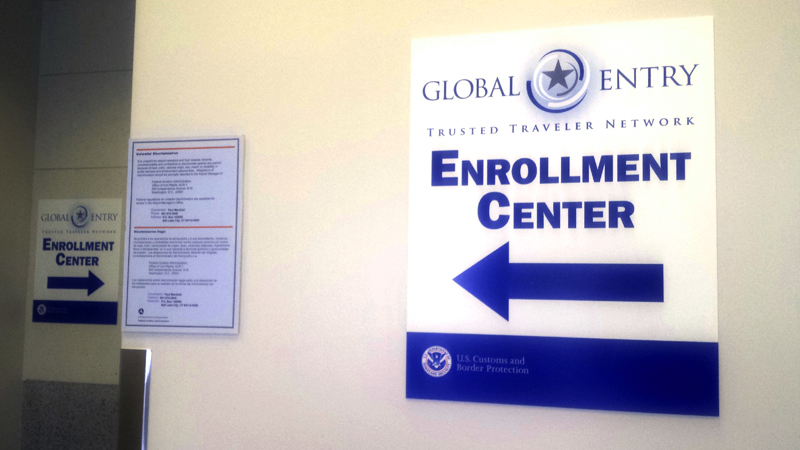 Recent horror stories about unusually long Transportation Security Administration (TSA) lines across U.S. airports and the general increase in summer travel have convinced me to apply for Global Entry, using one of the benefits of my new Platinum Card from American Express, which reimburses the $100 application fee.

What is Global Entry?

Global Entry is a trusted traveler program of the U.S. Customs and Border Protection (CBP) that offers approved passengers arriving in the United States expedited customs processing. Once approved, you can go straight to a Global Entry kiosk at participating airports, verify your fingerprints and move on to either baggage claim or a connecting flight if the port of entry is not your final destination. It’s useful for those looking to make tight connections or those who would rather not wait in a long line to speak with an immigration officer after a long international flight.

The process is rather simple. In May, I went on the Global Online Enrollment System (GOES) website, which is a portal to various trusted traveler programs including NEXUS, SENTRI and FAST, to create a profile. The application process took me about 30 minutes as I was required to provide many background details, including a list of countries I have visited in the last five years.

A week after applying, I received an email from GOES saying the status of my application had been changed and instructing me to log in to my account for more information. Once logged in, I saw a conditional approval notification letting me know my membership application had been processed and I was invited to visit an enrollment center to complete the process. And this is where the “fun” began. Even though there are appointments every 15 minutes, the earliest available slot at the Salt Lake City International Airport enrollment center wasn’t until November, nearly seven months later! Not helpful, considering I’m going to Europe in August. Furthermore, because I was advised to pick a time slot within 30 days of receiving the letter, I scheduled an appointment for Nov. 10 but decided to explore other options.

How to Move Up Your Time Slot

I’d heard reports of being able to walk in for an interview at other enrollment centers, so I decided to test the waters and called the CBP office in Utah. I asked the woman who answered if they accept walk-ins, to which she replied that they do not at that location, but she advised me to check the website every day to see whether a time slot would open up before my scheduled date, leaving me feeling skeptical after the phone call.

Another option I considered would be to schedule an interview at another airport I’d be flying through in the next few months. However, the only airport I’d transit through was the Long Beach Airport at the end of May, which has no enrollment centers, and even if I were willing to drive to LAX, there were no appointments available there until September.

Every day after that phone call, still unconvinced it would work, I checked the GOES website for a magical opportunity to reschedule, and a week later I saw a spot available on Oct. 2! Still not as desirable as I’d like, but I moved up my appointment to the October date. I thought maybe there was something to what the woman on the phone said, so I began checking the website a few times per day every day. Within a week, I was able to reschedule for June 6 and then again for June 1, which I eventually kept as my interview date.

Better Yet: Get a text message when appointments open up with GetMeGlobalEntry.

What to Expect At the Interview

When I went to my interview, I made sure to bring a copy of the letter of approval, my passport, my driver’s license and a bill proving my current address. An officer asked me a few questions including ones to confirm all the countries I had visited, my employer’s details and whether I’d ever been arrested. Keep in mind, if you have any misdemeanors or felonies on your record in the last 10 years, you likely will not be approved for Global Entry.

I was 15 minutes early to my appointment, but I didn’t have to wait for an officer to begin the process. He took my photo, as well as fingerprints, and after asking all the questions, told me I’d been approved by showing me my Known Traveler Number (KTN).

Another thing to note here is that Global Entry includes TSA PreCheck, so no more taking your shoes off and removing laptops from your perfectly packed backpacks! Unless you travel only domestically, it makes sense to apply for Global Entry ($100) vs. TSA PreCheck ($85), both good for five years, to avoid those long lines. I cannot wait to breeze through immigration upon arrival in the States from (hopefully many) international trips in the next five years!