Wow. I’ve said it before… Airfare deals seem to all come at the same time… or at least the ones I want to book. Let me tell you about what happened this week…

The Flight Deal published a great fare to Barranquilla, Colombia.. we’re talking about $250 round trip. Now, I haven’t been to Colombia (or anywhere in South America for that matter), so that was pretty attractive. Better yet, it was available from multiple US cities, including Chicago and Washing DC. Now, even though I live much closer to Detroit than Chicago, I fly out of Chicago pretty frequently to take advantage of the [usually] cheaper flights. I have a flight booked out of Baltimore later this year, so I had to get over to the DC area somehow. *lightbulb* What if I can position myself to DC through Colombia for that awesome price of $250? *dingdingding!* A quick search on ITA Matrix gave me some pretty decent flights from Chicago to Barranquilla and back to Chicago, and it even worked for the dates I needed! Now, I had to figure out dates for another trip with a friend before I could commit to this… so I booked two separate trips [and canceled one later] because I didn’t know what day I could depart.

That leads me to…

I had been planning on going to LA with one of my friends later this year, and the date of departure for my trip to Barranquilla was dependent on what dates we decided to go to LA. Now, this is part of my last ditch effort to get some use out of my Southwest Companion Pass, because it has sadly not gotten the use I was hoping it would get over the past year and a half. So, we’ll be flying Southwest from Detroit to LA over Labor Day weekend for the total price of about $450 for two people. Not an insane deal, but considering my friend absolutely has to be out there that weekend anyway, it isn’t a bad deal at all with tickets on all airlines [well, besides Spirit] running in the upper $300s plus.

At this point I thought I was done for the week. PSYCH.

This time it’s thanks to Fare Deal Alert (The Flight Deal’s sister site). I had been planning on taking a 3-ish week trip to Central America later this year. My plan was to fly into Managua, Nicaragua and out of Belize City, Belize. I was planning to redeem miles for the ticket sometime closer to travel… but I was able to do the same thing flying American for a total of $303 round trip. I am working on requalifying for Alaska Airlines MVP Gold or MVP Gold 75K, so this will help me get there, and I get 125% bonus redeemable miles. Definitely a better option than redeeming 30,000+ miles to get there! 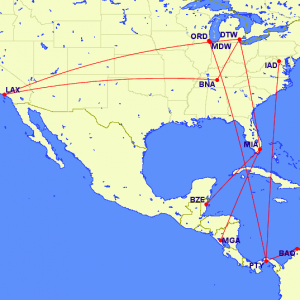