Yesterday, Jamie, of The Forward Cabin, wrote about his really good experience with Uber where the driver took a long route. Jamie contacted Uber about the ride, and they refunded part of his fare. Awesome. But it doesn’t always work like that.  I’m usually a fan of Uber too, but I had my first really bad experience with Uber a few weeks ago… and hopefully the last.

I was in Chicago for the weekend, hanging out at the Chicago Seminars hotel (though not actually attending the seminars), and wanted to meet up with a friend who lives in Chicago for dinner. She told me she would meet me at the Argyle Station on the red line. My original plan had been to take the shuttle to the airport, blue line downtown, and then red line to the Argyle stations, but I lost track of time and realized I was going to be late unless I called a cab… er… Uber. My Uber driver arrived, and I told him Argyle station. He wasn’t sure where it was off the top of his head, but pulled up the CTA map and we were on our way. Or so I thought…. Compare the location where I was dropped off to where I had asked to go. Yeah. Not close. Not close at all. Not to mention, the dude just dropped me off in some random place and told me it was right on the red line. It wasn’t, go figure. He was also a pretty major jerk when he realized that he didn’t know where to take me. 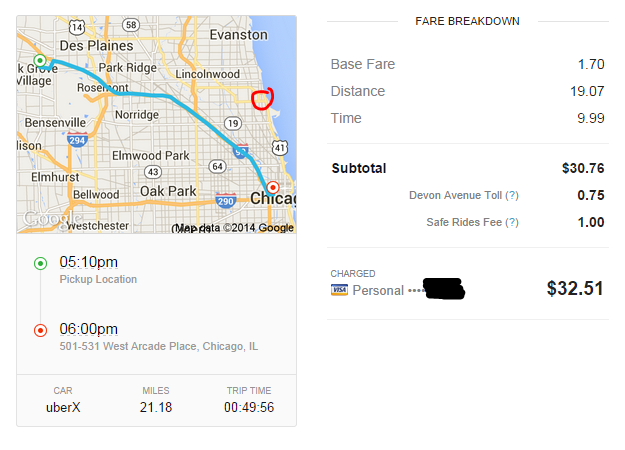 My Uber driver dropped me off in the wrong place…

Now, that’s not really even the worst of it! I submitted feedback through the app an asked for a refund since I then still had to go quite a bit further north (I did just take the CTA this time). An Uber customer service representative contacted me though email and told me that based on the pick-up and drop-off locations the fare seemed to be accurate. I get that that is true, assuming I was dropped off in the right place! I sent another email back trying to make that clear and never got a response… I ended up disputing the charge through my credit card company.

If you are interested in signing up for an Uber account, you will receive $30 if you use my link. I do also receive referral credit after you take your first ride. I do still recommend Uber as a service. Thanks for your support!