We didn’t leave Tyrol until a little later than we normally leave, because people were doing their second activity – either paragliding or skydiving (if they wanted to)…. Andddd I WENT SKYDIVING. It was amazing. As I’m writing this, it kind of feels like it was a dream. I’m glad I got the video so I can prove to myself that I actually did it (unfortunately, I can’t actually find that video right now, or I would add it to the post!). When I get home, probably in the spring, I really want to do an accelerated free fall now, which is like the first step to getting certified. But back to this time – skydiving over the Alps…. There are no words for how beautiful it was. It was definitely an opportunity I’m glad I didn’t pass up. There are also no words for what skydiving feels like… It’s not like the weightless feeling you get on a rollercoaster, you really don’t feel like you’re falling…. But like I said, not really describable… you should all go try it!! After skydiving we left for Munich! It was our shortest drive day, only about 2.5 hours. 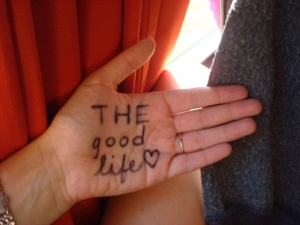 We stopped at Dachau, the concentration camp along the way. It was quite the day of mixed emotions. We had some time to walk around and see the camp… the more time I was there the more uneasy it made me feel… I can’t quite describe that either. We also watched a 20 minute video. First off, it was some of the longest minutes of my life… We learned about the Holocaust in school, but not like in this video. This video made more of an impact on me than all of the time we spent learning about it in school. It was horrific… and I can’t imagine anyone wanting to do that to another person… or even animal for that matter. It is not something I would wish upon the people that I dislike most in this world by a long stretch. We left Dachau and headed into Munich. 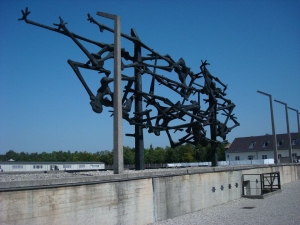 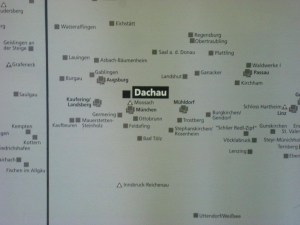 We checked into our hostel, I was rooming with Isabelle, Laura, and Cathrine. I’m really sad that my friend, Dominik, is not in town right now! He left for Nepal 3 days ago… but he told me to give is brother, Jakob, a call, so I did! We decided to meet up at the hotel, and he would show me around and then we would go to the Hofbrauhaus for dinner and beer after, and finish off the night by going to a club. Jakob showed me the city hall, the opera house, the statue of Bavaria, the location of Oktoberfest, and other things. At the Hofbrauhaus I had a liter of their original beer, a traditional German shot of some sort, and a pork knuckle.  It was all yummy! We were able to meet up with the rest of the tour there and we all had a ton of fun. It was definitely one of the crazier nights of the tour. Some of Jakob’s friends met us there and then we all went to the club. I only stayed there for about 45 minutes because Angus needed someone to go home with him, but that was okay because I had been up since 7 because of skydiving and we had another early morning to head off the Prague. It was overall a really fun night. I’m sad I couldn’t see Dominik, but it was great to meet Jakob and I really can’t wait to go back to Munich! It has been one of my favorite cities on the tour so far. Thanks again Jakob! See you next time! (And Dominik too 🙂 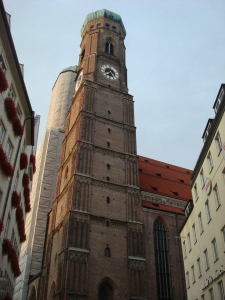 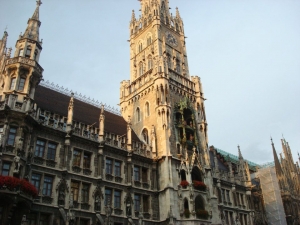 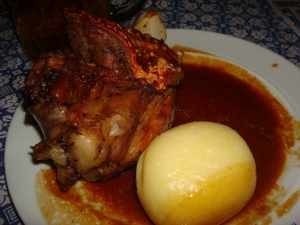 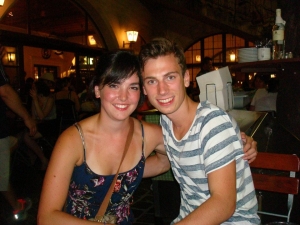 Today was another drive day, but once again not as long as many of them have been. It took us about 5 hours. We went straight into the city for lunch on our own  (I had a pasta with sausage and mushroom in it), and then a walking tour of the city. The walking tour wasn’t too long because it was really quite hot outside and everyone wanted to go back to the hostel. We got on a tram to go back to the hostel, and it got in a crash…. So then we had to walk an extra 20 or so minutes to get back here. The crash wasn’t too bad – it just rear ended a car. We’re pretty sure it was the car’s fault. When we got back to the hostel I got online for a little bit and then went back to my room. I’m sharing a room with Brea, Tania, and Catherine (Different Brea and Catherine than in previous posts). I laid down and was going to get up in 10 minutes and go to the pool, but then Catherine woke me up almost 2 hours later saying it was time for dinner. For dinner we had a large variety of things. It was, once again, really good. I especially enjoyed the red pasta and chicken wings. After dinner everyone got ready to go out. We had 2 birthdays in the group today, so everyone was pretty excited. The plan for most people was to go to the bar at the hostel, go to a bar in town, and then go to the 5 story night club that’s pretty famous in Prague. I decided to pass on the night club, but to still go out. When I was at the club in town I tried Absinth for the first time… I actually really liked it. I might be the first girl in history. I did however, not find it as strong as I had been expecting.  I’m planning on sleeping in a little bit tomorrow for the first time on this trip!