Portland, OR in 36 Hours

Home/Portland, OR in 36 Hours
Previous Next

Portland, OR in 36 Hours

Earlier this year there was a great fare on UA from DTW-PDX… I have a friend who lives in Portland, so it was a great excuse for me to take a mileage run/vacation to visit him for a short trip!

There was some ridiculous routing involved, flying over 6,000 miles in less than 72 hours, but hey, at least it was mostly in First (just not the segment from SFO-PDX, it was on a CRJ-200) thanks to RPUs I was gifted by a friend!

I arrived in Portland around 6pm on Saturday night, and was picked up at the airport by my friend. I was taking advantage of my free night at the Kimpton RiverPlace due to my Inner Circle Status – you can read more about why I decided to status match to Inner Circle this year here.

The hotel was lovely! It may be my new favorite Kimpton hotel, but it is really hard to say because they are all so great! 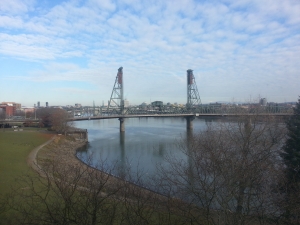 The view from the window of the bedroom. 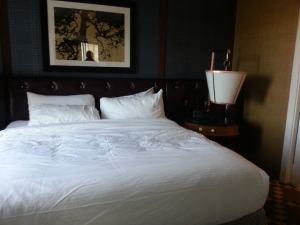 The bed was so comfy! I actually took this picture the next morning because I was soooo tired. 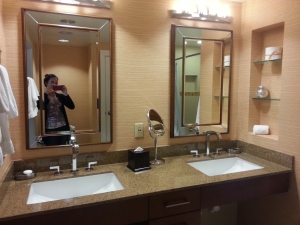 The bathroom part 1. Yup, that’s me in the background. 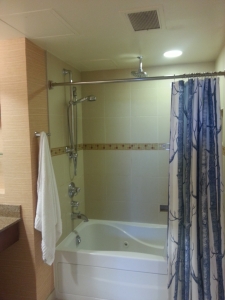 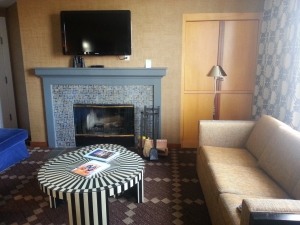 The living room. Yes that is a real fireplace! 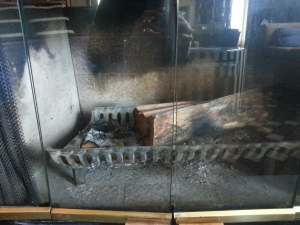 Close up of the fireplace. The logs are burnt because I had a fire in my room!!

I was also able to check out the Three Degrees Restaurant, and it was quite delicious! We just tried out a bunch of the starters. The Squash Bisque was my favorite!

Sunday was my main day in the city, and I began it with a run along the river! It was such a nice running route; I would love to have access to it every day. My friend came back to my hotel to take me out on the town.

The first stop was for coffee, of course! He took me to Case Study Coffee, a relatively new coffee shop in the area. I would highly recommend going there if you find yourself in Portland! They had some of the best coffee I have ever had.

After coffee we went to Powell’s City of Books — definitely a heaven for any book lover! I could have easily spent days in that store, especially considering that we spent over an hour in the rare book room alone!

The main event of the weekend was the Holiday Ale Festival. If you’re a beer fan, there is pretty much always something beer related going on in or near Portland. This was the first beer festival I have ever been to and it was a good time! There were people giving out their extra beer tickets all over the place, so definitely no shortage of beer. My favorite beer was The Twerking Elf. Seriously.

For dinner that night we went to Raven & Rose, which was good, but not one of my favorite restaurants ever.

It was a short visit to Portland, but I really enjoyed what I say of the city and hope to go back for longer than 36 hours sometime!