The Hang Up, Call Back Rule Succeeds in Real Life

Home/The Hang Up, Call Back Rule Succeeds in Real Life
Previous Next

The Hang Up, Call Back Rule Succeeds in Real Life

The Hang Up, Call Back Rule is a pretty common thing here in the points and miles world, one I’ve had to follow quite a few times when dealing with credit cards, award tickets, getting things refunded, and booking hotel awards, just to name a few.

The rule ended up being applicable to real life in a kind of funny way when I was in Venice, and if we hadn’t we would have missed our water bus (aka vaporetto) to the airport!

To recap, I was traveling with a couple friends in Italy, as the beginning part of my crazy cheap trip (or two) that is taking me all over this place this winter. My friends were headed home from Europe earlier than I was, and as such had an airport at the hotel for their early-morning flight. I ended up booking a shuttle to my next destination, and it was just as easy to have them pick me up at the airport, which was good because it meant that I was only going to spend *most* of my birthday alone.

Our plan had been to catch the second to last water bus over to the airport, and then take the hotel shuttle from there. At nearly the last minute, we found out that only cash is accepted at the water bus station that we were departing from, and we didn’t quite have enough. We started running towards the nearest ATM, which wasn’t that close, before we realized there was no way we were going to make it if we did it that way. Instead we exchanged $20 USD for Euro (at a pretty bad exchange rate) at our hotel, but it meant that we were going to make it! As soon as we had enough money, we headed toward the bus station, even a few minutes earlier than we needed to.

BUT…. right as we were walking up the water bus pulled away… 5 minutes early! That was a pretty sad moment, as it meant we would be waiting for the next water bus an hour later, and we were going to miss the hotel shuttle from the airport (which would have meant walking since the taxi minimums were 20 Euro and the hotel wasn’t really that far).

We turned around and headed back to the hotel.

About 2 minutes into the walk back, I decided it was kind of weird that the water bus would have left so early, and I knew there were other bus lines that make stops at that station, so I suggested we go back and just wait for a minute or two even though I was pretty sure that the bus that had departed was an Orange Line bus, which was the one we needed. We decided it was worth a shot and turned around.

Right as we were walking up, an Orange Line water bus appeared! It was our lucky day 🙂

My friend made me this card for my birthday, and even though the picture was taken earlier on the same day, I will forever associate it with hanging up and calling back on the water bus! 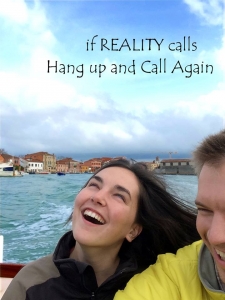