I eat like it’s an adventure. When I travel, I want to try all of the crazy things that I can’t get at home in the states, as well as all of the local specialties. On my trip to Korea I was able to try some pretty crazy things!

Of the not raw specialty, I tried Korean barbecue and plenty of bibimbop and similar dishes. I also had a really great, spicy soup… but I don’t know what it was because I just pointed at one and held up a finger to indicate that I wanted one of those.

The Korean barbecue was pretty amazing. I’d like to have that again. There was so much food!!! 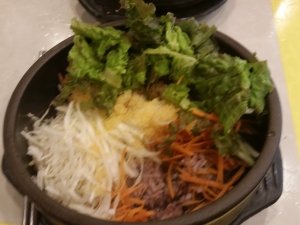 The more exciting part of the food escapades in Korea involved eating things that were raw… and in one case still moving!

This was my favorite bibimbop I had in Korea.

Well, technically it wasn’t alive… But since octopi are cold-blooded, they move for a little while even after they are chopped up. So it was a freshly chopped octopus that was served while it was still moving. It was served with a hefty portion of raw beef and a raw egg. I thought it was pretty good, and would definitely have it again! For the record, it’s super weird when the suckers get ahold of the inside of your mouth… and you have to make sure to chew well or the octopus can get stuck in your throat and kill you! YIKES!

And we finished the meal off with some raw crab for dessert… big crab that we sucked the meat out of, and little crabs that were eaten whole… I have to say, the large crab was SO GOOD. We got it from a to-go food stall, and only got one. AND I WAS REALLY SAD. Next time I go to Korea, I’m making a whole meal out of it. The little crabs weren’t bad either.

Large Raw Crab (in a bag)

Considering we were flying the morning after this, I think we’re pretty lucky that we didn’t make ourselves sick. So glad that I have a stomach of steel 🙂 Thanks to The Flying Consultant for trying all this crazy stuff with me.