Home/#TBT Europe 2011: London and Around
Previous Next

The first set of posts will be coming from August 2011, when I spent about a month in Europe. This was my first international trip without my family, and I was mainly writing the blog so my parents would know that I was ok. I will be combining posts by city, since many of my posts were quite short. Also, keep in mind I was 19 when I wrote this series of posts 🙂

Today had been a little more stressful than I was hoping it would be so far… at the airport my luggage handle broke, and my mom and I struggled to fix it for a while. I suppose that was technically yesterday though… When I got here today everything at the airport was fine. Got my bag and went to get a cab… little did I know it was going to be a 75£ cab ride. When I got to the hostel I met 2 girls that were really nice that are here for a different tour. We went out to lunch (I had a melted goat cheese salad – it was delicious!) and went to Platform 9 and ¾ and went to a bar for our first drinks here (rum and coke). I was going to go ride the London Eye… but I guess the line is usually superrrrr long, and I don’t know if I am up for that much traveling only to wait in a long line. It also depends on if I find someone to go with I suppose. Internet has also been interesting… I have had access to free internet twice today, but for some reason or another haven’t been able to connect to it… so that’s going to be interesting as well…. Well, I am off to go do something now, and I’ll upload this post if I ever can get on the internet. [8/3/11 3:27pm London, England] 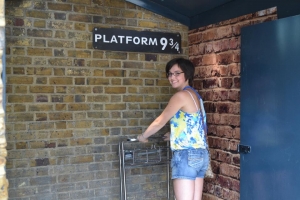 I did end up going to ride on the London Eye. It was less scary than most ferris wheels! I went back to King’s Cross and took the tube to Westminster. I got to see the Westminster Abbey. It was pretty cool looking. And the London Eye was cool too. I could see practically foreverrrr. Plus the line was only about 30 minutes long – so I’m definitely glad I went. Then I went to an internet café, because I still can’t get on the wireless here… and then came back to the Clink to take a shower and get ready for bed. There is a bar downstairs and I considered going because I figure that I could meet some people who are going on my tour, but I have to get up early the next 2 days (6:40 tomorrow, 6 Friday), and I haven’t gotten a lot of sleep the last 2 nights, so I think I might save that for tomorrow night. Not a whole lot else to report from today. Hopefully going to figure out the internet thing tomorrow after I get back!

Day 2 was a little more eventful [and less hectic] than day one. I got up at 6:40 am this morning so I could get breakfast [served at the hostel] and head over to King’s Cross Station. I had to be at Victoria Coach Station by 8:35, and I knew how to get to their underground station, but not the coach station. It took me a little extra time and I had to ask a few people, but I was still there early. It was ok though because there was free wireless so I was able to be online for a few minutes.

I went on a tour that went to Windsor Castle, Bath, and Stonehenge. Our tour guide’s name was Phil. He was really cool. We went to Windsor Castle first.  It was interesting… I personally think it’s all a bit extravagant. For example, the Queen has a doll house that has miniature wine bottles filled with REAL wine. I also have no idea why the King and Queen both need their own dining room, ball room, etc. But I suppose it was pretty cool still. We had 2 hours there and I finished seeing everything I wanted to in a little over an hour, but there were restaurants and shops around so I still have things to keep me busy. I went to the Cinnamon Café and got a cappuccino and a danish. It had been raining all day up to this point, and I of course didn’t dress for the weather because I don’t really have a way to check the weather!

Next we went to Bath. We got to go through the Roman Baths. I touched the water even though we really weren’t supposed to. It was sooo nice. I would loooove to take baths in that every day! Haha. After that I went to this restaurant called Seafoods. It was a fish and chips restaurant. They were voted the top 5 in south west England apparently, and since it was my first time having fish and chips I’m probably spoiled now. I met this guy named Ben while I was there. He was from somewhere in England… (I think). He had just come back from traveling around the states visiting family. I also have my first encounter with one of Europe’s (I think) pretty typical hi’s/goodbye’s – the quick kiss on each cheek. So that was interesting. I learned that Johnny Depp has a house in Bath too. If you go around the Bath Circus (Circus – Latin for circle), you go by 1, 2, 3, …, 6, 8, 9, … Johnny Depp’s is supposedly the non-existent number 7. And while we’re on the subject of Johnny Depp, the pirate accent we hear in movies is West Country English. Our bus was also a Mercedes Benz – it was super nice. Figured that was worth mentioning. 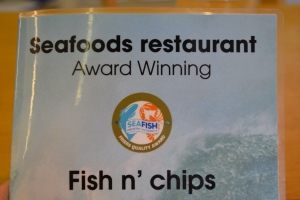 Next we went to Stonehenge, it was really cool looking, but there wasn’t a whole lot to do. I walked around and took some photos and looked through the gift shop and then left. I met some nice people on my bus that were from IL too. They were older and they had been in London for 4 days now and were going on a 6 day tour that leaves on Sunday. 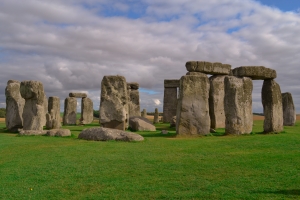 After Stonehenge we had a ~2hour bus ride back to London. I got dropped off at Harrods, this HUUUGEEEEE department store. I suppose it’s probably a lot like Sak’s, but I have never been to the original Sak’s. Everything was really expensive, that probably goes without saying. I tried on a pair of Armani jeans too! I really wanted to go to Piccadilly before I left London, so I took the tube there after. I was going to go to a pub that my tour guide, Phil, recommended, but instead I ended up going to a casino! I walked in and the guy at the counter greeted me in French! I was like ‘Hi!’ and then he said ‘Oh, I thought you were French, you look kind of French!’ First off, I have never gotten French before, and secondly, I don’t quite know how I feel about it either. Lol. I registered and everything, went to the bar, ordered a White Russian, and headed over to the slot machines with 10£. I was kind of losing, winning, losing, winning (like usual), and I was down to about 5£, and then through the next few spins I won a fair amount and decided that I’d stop when I doubled, or if I went back down to 10. I ended up leaving with 22.02£, so that was a pretty good end to the day. I hoped back on the tube, walked back to the hostel, took a shower, and now I’m writing this. Going to try to get on the internet after! My tour leaves for Paris at 7 am tomorrow! I can’t wait to meet everyone! [8/4/11 9:58 pm London, England]

Today was the start of my tour. We had to meet at the Clink (the hostel I was staying at) between 6 and 6:30 am London time. I ate breakfast downstairs and met a few people going on my trip. Shortly after that we headed out to the bus! I ended up sitting next to a girl named Laura, she was super nice! She is from New Zealand! Actually, it seems that most people from our trip are from Australia and New Zealand it seems. There are a few people from the UK and one other person is from the US. His name is Kelly, he is from Portland. We headed over to Dover to take a ferry over to France. Mostly today was a lot of driving! We stopped at the duty free shop before we got off the ferry, and then got on our next coach. It is brand new; we’re the first people to ride on it. And it’s a Volvo coach… they seem to have really nice coaches here. We eventually got to Paris and checked into our hotel. My roommates are Laura from New Zealand, another Laura from New Zealand, and Emma from Australia. We had some time here to get settled and then we walked down the street (through the pouring rain – literally, buckets of water being poured from the sky). For dinner we had escargot, frog legs, French onion soup, beef bourguignon, and a bottle of wine. It was delicious! After dinner we had a bus tour of the city. We stopped at a few places – Mont Matre and near the Eiffel Tower. Now we’re all back at the hotel catching up on our computers. Another early morning tomorrow; getting up at 6:30 to get ready for another busy day! 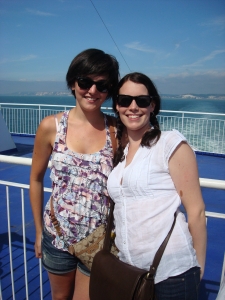 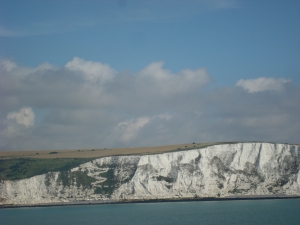 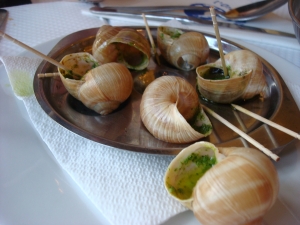