Home/Jjimjilbangin: Naked in Korea
Previous Next

My friends and I got naked in Korea.

Well logically, since I was there for more than a day and had to take a shower, right?

The Flying Consultant and I booked an amazingly cheap fare to South Korea, $430 round trip… I kid you not! While there, I figured it would be awesome to take the train from Seoul to Daegu to catch up with my friend Kara, who is teaching English there this year. Originally we were going to stay at her apartment, but since it’s small and she had lent her extra mattress to a friend we decided to go to the Jjimjilbang instead!

A jjimjilbang is a Korean Bathhouse. They’re segregated by gender and there are hot tubs, cold plunge pools, saunas, and sleeping areas. The sleeping area was the real selling point for us, because it meant we’d get to sleep on mats instead of straight on the floor

We specifically went to Elybaden. Elybaden has five different floors:

The Jimjilbang is open 24/7 since that is where people are able to sleep, but the rest of the facility has specific operating hours. We arrived pretty late in the evening, so we only had about 45 minutes to enjoy the water zone that night.

The water zone consists of 4 different temperature pools and 4 different temperature saunas, including a salt sauna… which let me say now, was just simply amazing! Elybaden takes high-sulfur content water from a natural hot spring for their hot tubs. There is also a water park, but we didn’t check that out since it was already closed.

So, about that naked part…

I was serious (but, I don’t have proof)! You can’t wear a bathing suit into the hot spring area! That’s why it’s segregated by gender. So, there were 3 of us girls, and 1 boy, so we split up into our separate areas. So Kara, Jen, and I hung out in the bath house together, of course testing out all of the different temperature pools and saunas. Speaking of which – back to the salt sauna… Did I mention it was awesome?! There was a huge pot of salt for [gently] rubbing all over your skin, and my skin seriously has never felt so soft. The nice Korean ladies all helped us rub salt on our backs too. #sosweet

Probably like a normal American, I was kind of nervous about the idea of being completely buck naked in front of a bunch of people – regardless of them being friends or strangers, but it’s kind of funny being surrounded by people from other cultures who find the whole experience to be completely normal. It made it pretty easy to be comfortable, and now I wish that I could find one of these in the states!

Once the water zone closed we headed upstairs to the sleeping area and the group was reunited. There are separate sleeping rooms for men and ladies, and also a non-gender specific room. We checked out all of the saunas at the Jjimjilbang level, with a temperature range from about 10 to 88 degrees Celsius, so that’s from 50 to 190 degrees F. Following that we bought some ice cream and headed to bed.

I didn’t get any photos (they tend to frown on those at the jjimjilbang), but there are a few that are available online. 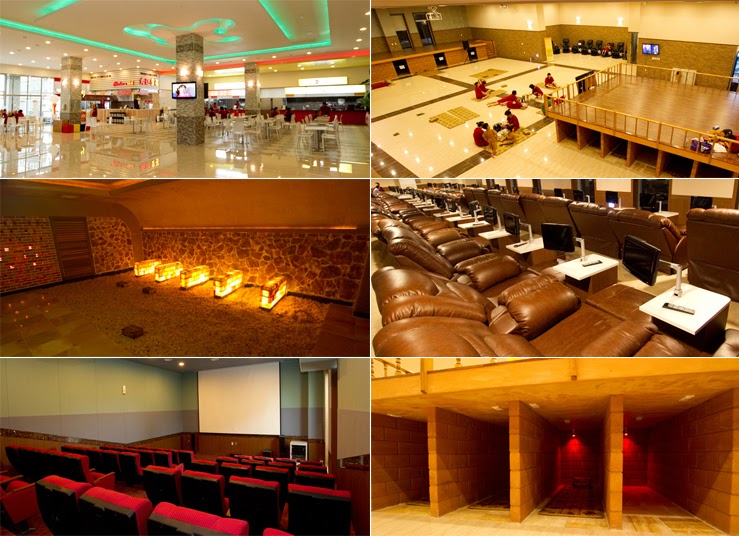