Another drive day today… but it was a lot better than yesterday. We watched A Team on the bus in the morning, it was a decent movie. We crossed through Montenegro on the way to Croatia. It was funny because in order to get through the boarder more quickly, you can bribe the border guards… so 4 beers and €20 later we were into Montenegro. We stopped in a town for lunch, most of us got burgers. They were huge and very good. I also had some tangerine flavored ice cream which was delicious. When we got back on the bus we worked on designs for our trip t-shit and voted on the best one. Not long after that we were arriving in Dubrovnik! I am rooming with Laura again. We had a little free time, then a buffet style dinner. The chicken salad was really good but I wasn’t thrilled with anything else. We had a little more free time after that and then went into the old part of Dubrovnik all together. Carl (our tour leader) showed us around a bit. Dubrovnik is an amazing city. I wish we were spending more time here. It is definitely somewhere I think I am going to want to come back to – but I’ll know for sure after tomorrow! After our mini tour we went to a bar for a bit. Laura and I came back pretty early because we are planning a long day tomorrow. Plus, everyone is planning to go out again tomorrow night, and 2 nights in a row would be rough with how much we are trying to do already. We can just catch up on our sleep the following day on the bus!

Today has been a pretty awesome day so far. Laura and I got up a little after 8 to head to breakfast and go into the old part of the city. We were there by about 9:30 and bought our tickets to go up and walk around the city walls. It was extremely hot, even in the morning, but the views were gorgeous. It took us just under an hour to walk the entire way around the city. When we came down, we just wandered around, looked at shops and such. Eventually we decided on a place for lunch. The restaurant was called Dominos. We ordered a seafood platter and it was MASSIVE. There were 4 kinds of fish: snapper, sardines, amberjack (the local fish! Dad, you’ll like that!), and one other that I can’t remember. There was also squid, calamari, octopus, scampi, mussels, prawns, and I’m sure I’m forgetting things. We actually couldn’t finish the whole thing – but we almost did! I think about 5% of it may have been left at the end. I looooved the amberjack. After lunch we wandered around some more. We went to a bar on the cliffs and took a quick swim in the Adriatic Sea, it was very refreshing on a hot day like today (although it is always like this here apparently). Tim jumped off of one of the cliffs, but neither of us did. In the past year there have been a lot of injuries and even a death from the cliffs… scary. I did kind of want to, but being slightly afraid of heights doesn’t help much with stuff like that either. Laura and I did a fair amount of gift shopping today. We went to the memorial for the Dubrovnik defenders, and we were planning to go see the war photography, but we didn’t have enough cash left on us (Croatia uses the Kuna – there are approx 5 Kuna to 1 USD). We finished up our shopping and got back on the bus to the hotel. I got online for a bit this afternoon and uploaded yesterday’s post and talked to a few people from home. We still don’t have an exact plan for the evening, but I will append the events that are yet to come for today to the end of this post either tonight or tomorrow! 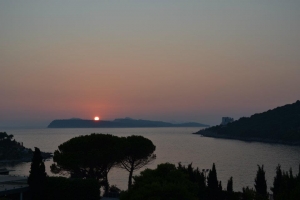 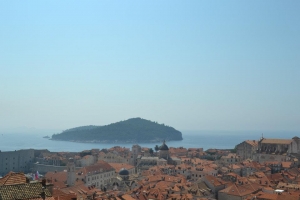 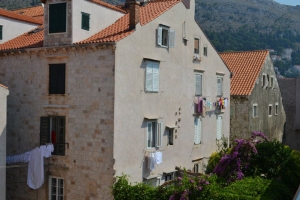 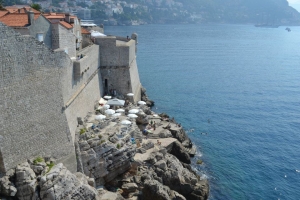 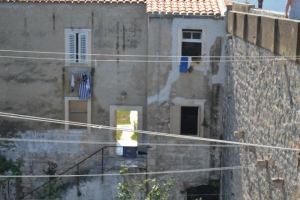 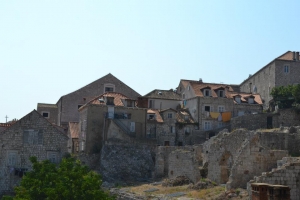 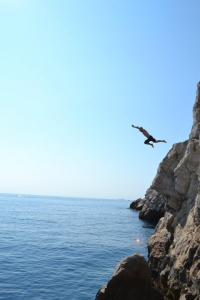 We ended up just hanging out in the room for a bit – Laura read her book and I took a pseudo-nap. We decided to go to the supermarket to pick up some random things: peaches, ice cream (because 2 weren’t enough for one day), chips, chocolate, and mixer. Clearly the only necessary things in life. We got back to the hotel and made some drinks and sat out on the patio type thing with some other girls on the tour. Not much was going on so we retired to our room pretty early… it’s only 10:30 here. I’m planning to get up a little early tomorrow so I can get online before breakfast and then we are off to Zadar!

DRIVE DAY! Again. Today was a lot shorter than other days. It was only about 7 hours. We made a stop in Bosnia on the way. That was pretty cool because it wasn’t a country I was expecting to go to, even though it was only a 20 minute servo stop. When we got to Zadar we checked into our hostel and headed into the city. I saw the sea organ and the monument to the sun, along with a really old church and the largest Roman forum on this side of the Adriatic. Laura and I did a bit of shopping and had some dinner. The restaurant we went to was decent, but the service was pretty bad… After dinner we walked around a bit and Tim and I got into the sea for a few quick seconds, it was a little freaky though because of how dark it was! We are currently all sitting outside at the hostel. I’m drinking a cranberry inCider. It is AMAZING. I really hope we have them at home and that I can find them when I get back! 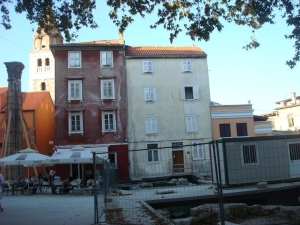