I finally got my voice all the way back today! The last few days I haven’t been able to talk until close to lunch time. It has been really annoying. There is this cold going around to everyone… blah. This morning our boat was beached… the water level had receded about 3 ft overnight and it took us almost an hour and a half to get out. We actually got to sail today too! So that was pretty exciting. Going to bed early to try to finish getting rid of this cold (plus I didn’t sleep well last night). 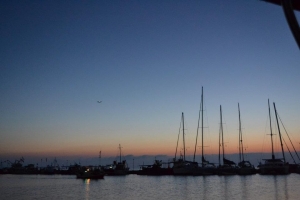 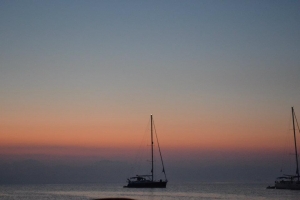 Today is our last day out on the water. I’m sad to be leaving because it has been really relaxing and nice, but excited at the same time because our boat was somewhat interesting at times… Tim and I made French toast for breakfast, it was realllllyyy yummy. We saw dolphins swimming in the afternoon too which was awesome! Sadly, I didn’t get a picture, I tried but they were gone too fast. We made a stop on a beach and just laid out in the sun for a bit. Brea and Renee made chicken nuggets for lunch, they were pretty good. I did a back tuck off the front of my boat… so did Stacy, but his didn’t go so well! We had another included dinner tonight. I had pork souvlaki. It had really good flavor, but was a little bit dry. Last night sleeping on the boat tonight! 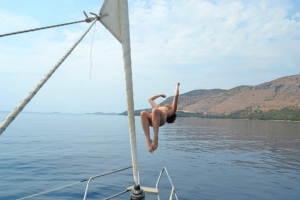 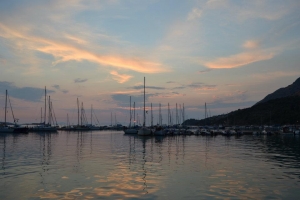 Today was quite a long drive day. We left Greece at 8:30 Greece time (so 7:30 Albania time) and didn’t get to Albania until about 6:15 Albania time. We made a few cool stops along the way. Tim and I climbed to the top of a bunker and I had my first Magnum ice cream, it was caramel, yummy. The last 4 hours or so of our bus ride were quite horrible… it was almost 100 degrees outside and out air con decided to bugger out for the rest of the trip. It had to have been over 100 in the bus and we were all pouring sweat. The roads were also super bumpy and twisty, so it was overall pretty uncomfortable. We took a quick stop in the city and Laura and I ended up talking to this guy that is a world record holder in foot juggling – check it out. Then we had a quick driving tour of the main part of the city (on the damn hot bus). Luckily, our accommodations tonight are really spacious. There are 4 of us sharing a “room” but it’s really a kitchen, living room, 2 bedrooms, 2 bathrooms. Probably somewhere around 600 or 700 square feet. Craziness. For dinner we had mashed potatoes and some sort of meat. I think it was turkey… but we really don’t actually know. Going to be another early (ish) night here. There’s not a whole lot to do. Super excited for Croatia tomorrow though! 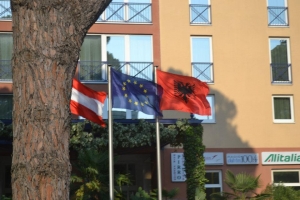 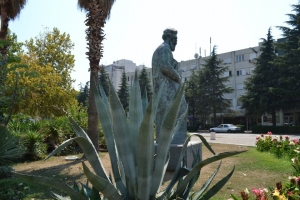 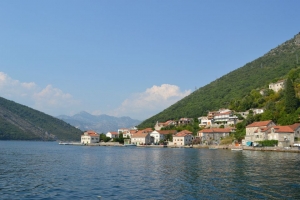 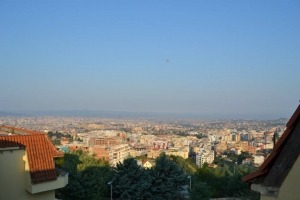 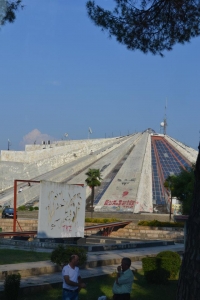