My Flight Was Diverted Back To Origin Airport!

Home/My Flight Was Diverted Back To Origin Airport!
Previous Next

My Flight Was Diverted Back To Origin Airport!

It was like any other day of travel… I was monitoring my flight status throughout the day. By midday, I knew that the midwest was having some weather issues because of a friend who had a cancelled flight from ORD – AZO (Kalamazoo, MI), so I began keeping a closer eye on my flight. I was flying Southwest.

There were winter weather advisories for pretty much all of the Michigan airports Southwest services, but few (if any) flight cancellations. I’m pretty much always up for extending my trips, but in this case I really did think I needed to be back for work since it was already going to be a short week in the office.

2.5 hours to take off and no cancellation, so I hopped on the light rail to BWI.

1.5 hours to take off I arrive at BWI, flight is still on time.

30 minutes to take off, our plane begins boarding.

Approximately 45 minutes into our hour and 25 minute flight the pilot comes on the intercom and says “We just got a call from our company. Due to deteriorating weather conditions at Flint, it has been determined unsafe to land there. We are turning around and heading back to Baltimore.” My flight was diverted back to BWI! 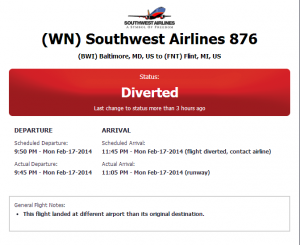 I was shocked! This flight only had about 30 people on it anyway, so I don’t know why they didn’t just cancel it! I was in damage control mode now though… $8 for internet so I could email work/text parents/text my boyfriend to come pick me up (Google Voice is a great thing).

The flight crew said they would have more information for us upon landing. When we landed they made it a very stream-lined process. Some people made it on the next flight out, late morning the next day, and some people were put on the evening flight the next day. I was on the evening flight, but didn’t mind because it meant an extra day in Baltimore and I wasn’t going to make it back in time for work either way.

All passengers were also provided with a distressed passenger certificate to get discounted rates at hotels. 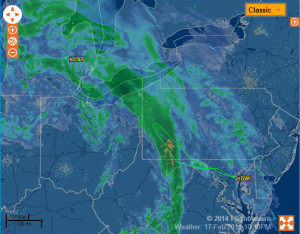 Update: I called Southwest Customer Support at 214-932-0333 and was able to get a $100 voucher for future travel as a result of the above events!