This Bra Could Be Life-Changing for Travelers

Home/This Bra Could Be Life-Changing for Travelers
Previous Next

This Bra Could Be Life-Changing for Travelers

Underwear can be a challenge when planning for extended travel. You want to have enough the you’re not doing laundry every few days but not so much that a quarter of your bag is full of it, am I right ladies? Not to mention you probably only want to have one or two bras with you. I know how you feel.

The knix 8-in-one Evolution Bra could be a game changer (and I hear that their underwear is pretty amazing too)! 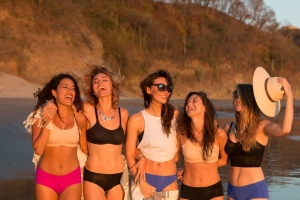 There’s a Kickstarter Campaign currently going on for the Evolution Bra with well over $400,000 raised. I’ve never supported a Kickstarter campaign before, but this looked too good to pass up and also gives me a chance to try out some new travel underwear.

I love the idea behind the Evolution Bra — simplicity, comfort, and definitely won’t complain about doing less laundry! Shipments are scheduled to start going out in December and I’ll follow up with a full review of the bra and underwear then.

Will you be trying out a knix product?